Hot Drinks in Madrid - They Do Exist 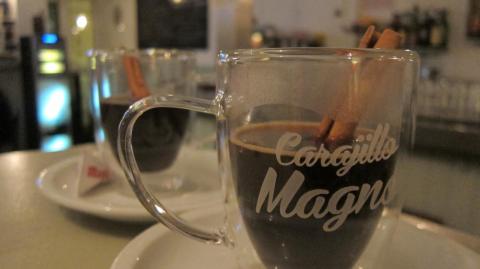 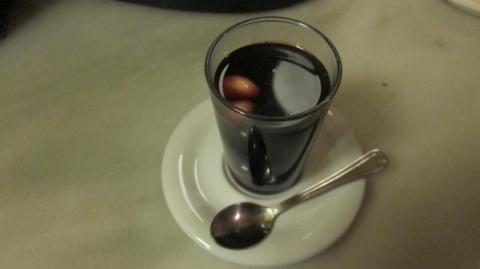 I have always been a fan of hot alcoholic drinks. Some of my first experiences with alcohol was with hot hard cider on a cold evening. At university in my quest for something that would keep me awake but also get me drunk I invented “tea n’ pulse”. It was super strength cider mixed with hot tea. I loved it but unfortunately it didn't catch on. I was a bit bemused at the success of Redbull and vodka a few years later that was tackling the same target market but without the great taste of my version.

When I lived in Luzern, Switzerland the locals seemed to love kafi Zwätschge which is a weak coffee mixed with a plum schnapps. As a fan of hot drinks I soon became passionate about this one too. Also to my great surprise Carajillo was very popular in Luzern. This is a Spanish drink of espresso normally with brandy but sometimes whisky, or rum. It was a bit like the Gin Tonic craze taking over Madrid in that every place was trying to make it just that little bit fancier. They would warm up the brandy first or even flambé it.

When I first moved to Spain I was upset to find that Carajillo is not really that popular here and when it is served it is usually just a mix of cold brandy and espresso which ends up being just a cold coffee and spirit mix. This Autumn I was very keen to see that Magno Brandy was sponsoring a sort of Carajillo pub crawl called “ruta del carajillo”. Basically they had a list of over 70 bars around Madrid where they were offering special Carajillo that came with the heated brandy that I love but also a few coffee beans, some citrus and even a cinnamon stick. Much better than the cold coffee spirit mix!

Well after having a decent Carajillo it really put me in the mood to see what other hot alcoholic drinks I could find around Madrid this winter. In general it’s not too hard to find coffee that’s been spiked with something. Pretty much all the Irish bars will serve you an Irish Coffee and any bar will give you a coffee with Bailys if you ask. Bars often have their own version, for example Cafe Manuela in Malasaña which is a pretty traditional Madrid bar has one called “Manuela” it's pretty simple and not plied with whipped cream which I can't stand.

Around Christmas time mulled wine is popular in many countries; Glühwein in Germany, vin brulè in Italy and vin chaud in France. In Spain it would be translated as vino caliente but until recently I’d never seen it anywhere. They seem to think of it as a sacrilege to wine. Considering that they're quite happy to mix the same sacred wine with Coca Cola to make Kalimotxo, I’m not so convinced.

After a bit of research I discovered there is a place in Madrid that serves mulled wine. It’s an old bar in the top of Lavapíes called Vinícola Mentridana. I went to try it out and although it doesn't look so special it is pretty tasty and a warm welcome to find in Madrid.