How to order a beer in Madrid 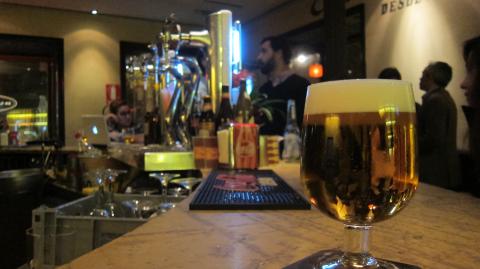 Unlike the UK, the locals in Madrid will never be seen drinking a pint with a tiny flat head unless they are in an Irish bar and even then they would probably be drinking a half. The smaller glass means that the beer is always cold and the creamy head means that the beer is fresher with more fizz. In order to create the creamy head they do waste about half a beer every pour but I’m not the bar owner, I’m the bar drinker, so it’s not really my problem. I was a little skeptical about these things at first but I soon began to appreciate them.

When I first arrived to Spain I lived in Barcelona and I was used to the ubiquitous "caña". This is usually between a half pint and a pint so not too bad (300 to 400ml). In Madrid I tried this at first with varying success. Sometimes you'll get over half a pint like Barcelona but sometimes it would be closer to a quarter pint. As I stated before, I've gotten used to the fresh cold beer in smaller glasses but for heavens sakes, I don’t want to be drinking beer out of thimbles. Why on earth do they want such small beers?

Well, it comes down to the free tapas that they offer; a small beer means more free food for your buck. I can see the point in that but in Madrid they normally give you crisps or olives. It gets old pretty quick. I’m happier with a larger beer so how do you go about ordering it?

I usually go for a “Caña Doble” or "Cerveza Doble". This will usually get you around ¾ of a pint (300 to 400ml). There are a few bars like La Bicicleta that serve it a little on the small size and also offer “Cañas Triples” but this is not really the norm. You’re usually fine with the “Caña Doble”.

Finally, if you really want a pint with very little head on it you can try and order “una jarra sin espuma” but you will definitely get a few weird looks.